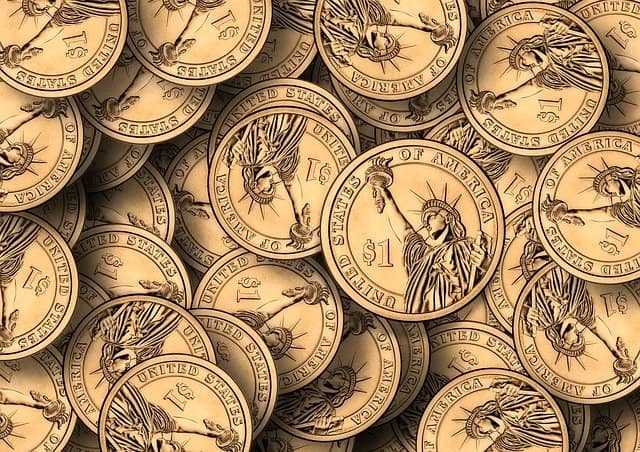 Equity investors kept using the buy-dips trading strategy this past week as there was another long downside shadow on the weekly candlestick registered. The sequence of higher lows remained in play, and that points to the uptrend as the general direction. According to the weekly chart below, 55-bars Exponential Moving Average acted as the support curve, lifting the index upwards. On the other hand, two concerns remained for the bulls. First, the S&P 500 benchmark closed the previous week below the psychological round-figure mark of 3000 points. Second, the all-time high kept standing. Both factors could influence another wave of selling pressure at least for the first half of the upcoming week. At the time of writing, futures pointed to a lower open on Monday. The long-term perspective is still positive though. The Bull-Bear trend indicator points to a wide bullish surplus. Even the bearish rally noticed on August 24 did not force the indicator to cross the zero line. Bollinger Bands %B remained above the 50% level, underlining the bullish phase of the trend. However, buying the S&P 500 on the very top of the market would not be a good idea as bearish whipsaws are possible. We’d suggest taking some profits and waiting for the local bottom to form before renewing long positions.

The U.S. dollar index went off the local top. The weekly chart below shows how important the upcoming week will be for the graphical analysis. The bears had an attempt to continue the uptrend (red arrow) but failed to hold mid-week gains as the DXY slipped back down. What’s more, the selling pressure was accelerated and the greenback was sold off across the board. Main gainers were Euro, British Pound and the Canadian dollar, while the Japanese yen did not add a negative sentiment to the index. As a result, DXY dropped -0.51% to 98.33. On the other hand, the support trendline limited further bearish action. It used to act as the support line since the recent bullish swing started in June. Therefore, it would be a tough challenge for the greenback bears to break the index through it. However, if they succeed, that will create a technical precedent and a possible reversal pattern. Such a breakthrough might push the U.S. dollar index lower to the horizontal support at 98.04, the top of the market noted on April 29. Shorting the overall index might be reasonable, however, any particular currency pair should be analysed separately as all of them have different sentiment currently, so traders should be selective.

The British Pound overperformed the rest of the FX market this past week. Of course, there were mainly fundamental reasons for the bullish rally we saw last week, but the technical analysis was also important. GBP/USD surged +2.56%, charting the strongest weekly gain since September 2017. The range was also huge as the pair was trading near the lows at 1.2200 initially and then soared to 1.2700 high, gaining incredible 500 pips in two days. What’s also important is that GBP/USD closed the week (1.2649) above the bottom printed on December 10, 2018 (1.2588). The weekly chart setup below shows a mixed bias. On the one hand, GBP/USD is still in the downtrend as the rate remains below the 89-weeks Exponential Moving Average. The bulls did not even breach the descending resistance line (dashed) despite the strong demand and dramatic reversal. However, MACD trend indicator pointed out a strong buy-signal as its lines performed the bullish crossover, and the distance before the zero levels is still huge, so the pair has a long path to go before the oversold conditions were eliminated. The Relative Strength Index confirmed that suggestion as its value jumped above the 50% threshold for the first time in six months. Given the speed of the bullish rally, the upside risk remains. We would suggest a bounce-back toward 1.2500 support before the bulls will renew the buying pressure. The main reason for such a scenario is that the upside swing was too fast, and the market needs to rebalance. Daily and intraday oscillators are extremely overbought, and they also need to reload before the rally continues. Therefore, implementing the buy-dips trading strategy looks reasonable at this point, while shorter timeframe analysis should indicate the best entry point for longs of GBP/USD this week.

Another surprise was in the yen’s performance as it went against the general market. Japan's currency weakened on the back of risk appetite seen in equities. USD/JPY gained strength despite the overall weakness of the greenback versus other majors. Thanks to the weekly gain of +1.41%, which was the largest appreciation of the pair in 14 months, USD/JPY charted the bullish engulfing pattern on the weekly timeframe (see the screenshot below). Although the bulls did not breach the resistance level at 108.50 with the first attempt, another test looks imminent. The medium-term analysis points to a median magnetic line as the strategic target for the bulls, so the exchange rate of 112.00 yen per dollar would not surprise currency traders shortly. The only concern (and the nearest barrier) is the horizontal static line at 109.32, and the bulls have to gain power and breach it if they are really intended to keep the momentum and continue the uptrend. The buy-dips strategy is also applicable here as there is no trend with one-way price action. Pivot points to consider new entries are placed at 108.00 and 107.80, but volatile market conditions could lead to even a deeper pullback toward 107.50 support. Nevertheless, forex traders should monitor intraday action and performance of U.S. stock indices to find attractive entry levels. If equities kept playing the same scenario of bouncing back down before charting a bullish rally, USD/JPY would reflect the action. It’s also worth having a look at the GBP/JPY cross-rate, which soared almost 700 pips last week.

The loonie gained strength, finally. It’s been a while since USD/CAD was trying to break through the resistance range of 1.3300/50, and every new bullish attempt was leading to short-term pullbacks. The past trading week was different as the bears took the markets under control, pushing the pair toward 1.3200 support. What’s more, thanks to the weekend gap, the weekly candlestick was nothing but bearish engulfing. Nearest targets for the downtrend are 1.3171 (already tested last Friday) and 1.30286 (the bottom printed on July 12). The technical sentiment is bearish with average directional index shifting the surplus to negative and the mainline heading toward the threshold. The relative strength index is continuously bearish as well. What the bears need is a strong rally south to eliminate defensive barriers of the bulls and continue the downtrend. The price action of WTI Crude Oil is supportive of the Loonie as the recent development of the Middle East escalation could lead to a supply shortage. WTI Crude surged almost 4% last week.