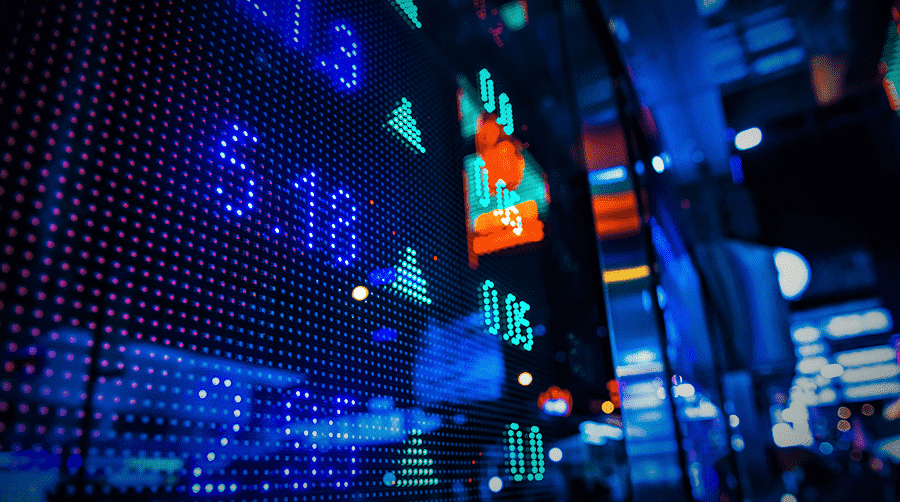 
Global equities suffered from the processes happening in the oil market last week. As a result of the selling pressure and risk-off sentiment, major stock indices lost the bullish momentum of the recent recovery. However, the tech-heavy NASDAQ Composite index overperformed the global equity market and managed to recover most of the mid-week losses. The long downside shadow on the weekly candlestick leaves hopes for the bulls to continue the upside action. On top of that, Monday open was positive for the index in the Asian trading session. At the time of writing, NASDAQ Composite was gaining +0.92% or 82.0 points. The technical analysis shows that the market players are getting the background ready for a bullish breakout and continuation in the long run. The daily timeframe (see the screenshot below) switched the short-term technical bias to bullish as the Ichimoku leading span performed the bullish crossover marked by the green arrow. Besides, the current rate is above the cloud itself and above the Conversion line acting as the nearest support curve. The horizontal static resistance is placed at 8836.2 points, the highest daily close price charted on April 16. A potential bullish breakout with a daily close above it would open the road to all-time high value registered in February 2020. Other indicators are in favor of such a scenario as well. The Average Directional Index has a bullish surplus between +DI (green) and -DI (red) lines, while the only concern is that the ADX main line still remains below the threshold. Fast and sensitive Stochastic RSI has just performed the bullish crossover, and both of its lines headed North, reflecting the bullish reversal last week.

However, traders should be cautious in terms of holding their long positions through the most critical macroeconomic events this upcoming week. Wednesday is going to be an essential day for the financial markets in general and stock indices in particular. Besides the US GDP report for the first quarter to be published on the New York open, traders and investors will be watching the US Federal Reserve to announce the interest rate decision and economic statement. The Federal Open Market Committee will host a press conference with a detailed update of the state of the world’s leading economy. Therefore, taking profits is recommended as a high level of volatility is expected.

Although the US dollar index had quite a tight trading range last week and the weekly candlestick has a long upside shadow, there is a possibility for the greenback to keep gaining strength in the week ahead. DXY added +0.58% to the value of 100.29 points, which was the third weekly close above the psychological mark of 100.00 points. That’s an important achievement for the greenback bulls, at least for the long-term analysis.

The daily chart setup below points to bullish sentiment. The index is above Williams Alligator’s lines, which are placed in the correct order to proceed with the upside action. The MACD trend indicator is bullish with the histogram constantly above zero and both lines in the positive territory. The RSI oscillator is above the 50% line with a lot more room to go north.

However, the dollar bulls should consider waiting for a better price before entering the market. The short-term outlook points to overbought conditions intraday and the hourly oscillators need to reload the momentum. On top of that, if the risk appetite kept growing in the FX market in the first half of the upcoming week, then the demand for the greenback might ease the technical support for DXY. Again, the upcoming fundamental events might be crucial for the trend direction.

The most heavy-volume currency pair continued sliding last week. EUR/USD has lost -0.47% of the exchange rate but has found a local bottom at 1.0727, retracing from it to 1.0823 (Friday close). The buying pressure continued on Monday morning as the pair tested the intraday pivot point at 1.0840. If the bulls were able to lift the rate above it on the hourly timeframe, then the market would eye the next target of 1.0860 and 1.0880 in extension.

However, the technical analysis of the daily timeframe is not so obvious in terms of the bullish momentum. The MA cross indicator shows a bearish pattern with the key resistance at 1.0900. Both short- and medium-term moving averages are headed south and far from the opposite crossover yet. So the bulls have to pump quite a large trading volume in the market to reverse the overall downtrend. On top of that, the Average Directional Index is bearish with the mainline rising, meaning that the volatility and momentum are reaching a crucial point. The fast Stochastic RSI oscillator has just delivered a buy signal as its lines performed the bullish crossover but the overall action is descending with the sequence of lower highs since the recent peak on March 30. Therefore, traders should watch the indicator around the middle level. A bearish crossover might cause a sharp decline of EUR/USD as the long-term technical outlook is negative.

The British Pound was one of the weakest currencies among majors versus the US dollar last week. GBP/USD declined by -1.09%, testing crucial technical support at 1.2250. However, the short-term analysis points to a high likelihood of a bullish rebound towards 1.2440 where the pivot levels come. Therefore, different timeframes create a mixture of technical bias, which might lead to several reversals in the upcoming week.

The daily timeframe points to a sideways consolidation as the most likely scenario. The Double-Bolli setup shows that all of the bands have narrowed the range and the volatility eased compared to the recent turmoil. The rate itself is hovering around the middle line (1.2407 currently), while the middle range of the Bollinger Bands indicator (deviation 1, yellow background) hasn’t been breached since the bearish slide on April 15. Nearest resistance levels come at 1.2496 and 1.2586. Those are the levels attractive for bearish reversals, so traders should consider taking profits and open fresh shorts there.

The Williams %R oscillator is reflecting the buying pressure, bouncing from the oversold territory. However, the lack of significant progress for the bulls means that the indicator is still below the middle threshold thus in the bearish zone. If the sequence of lower highs remained in the indicator’s window, then the sellers might reactivate the pressure on GBP/USD. Neutral so far.

The Australian dollar, in contrast, was one of the strongest majors in the FX market last week. The AUD/USD currency pair did not reflect the overall strength of the greenback on the back of better-than-expected macroeconomic data and support from the price of gold, which is trading at 18-year highs. The technical outlook is in favour of a bullish continuation, at least in the light of recovery from the previous loss.

The daily chart setup below points to a bullish bias in the short-term perspective. The Fibonacci Retracement Levels tool connects the highest daily close rate on December 31, 2019, and the lowest daily close price on March 19. It is crucial for the technical analysis as whipsaws and shadows are not taken into account by the vast majority of technical indicators. As a result, AUD/USD has recently breached the resistance level at 0.63786 and headed towards the 38.2% Fibo resistance at 0.65293.

A combination of two moving averages (simple and exponential) with the same period of 89 days confirms the previous suggestion of crucial technical levels to be tested in the week ahead. EMA89 is currently coming at 0.64592 and the distance from the current rate is more than reachable for the bulls. If they manage to lift the rate above the initial resistance curve, then the market will eye SMA89 at 0.65381, which is near the Fibo resistance.

The Relative Strength Index has a robust bullish momentum, the line is above the 50% line and ascending. There is an essential requirement for the uptrend to breach the level of the recent peak in the indicator’s window. That will help the bulls to avoid the bearish divergence on the oscillator.

The price of gold is in the long-term uptrend with new records achieved last week. The yellow metal charted the highest weekly close rate in more than 18 years. The technical sentiment is extremely bullish with quite a large trading range expected in the upcoming months. The Ichimoku Cloud trend indicator shows that the distance between Conversion and Baselines is enormous, meaning that bearish whipsaws might have rather long downside shadows on daily candlesticks. However, the buy-dips trading strategy is preferred with support levels coming at 1715.00, 1709.00 and 1705.00 in extension.